Sime Darby Berhad reported a 73.8 per cent jump in net profit to RM1.4 billion for the financial year ended 30 June 2021 (FY2021). The higher profits were achieved on the back of a 20 per cent increase in revenue to RM44.5 billion.

These robust results were mainly due to the Motors division’s exceptional performance in most markets, particularly in China. 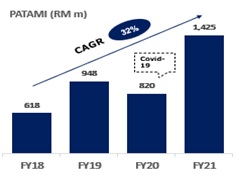 “We are very pleased with these results. Our profits have grown from RM618 million in FY2018, the first year after the de-merger, to just over RM1.4 billion this year. We have essentially doubled our earnings over the past four years,” Sime Darby Group Chief Executive Officer Dato’ Jeffri Salim Davidson said.

“This is the result of the successful execution of our 5-Year Value Creation Plan developed just after the de-merger. It is also a testament to our very capable management team and our geographical footprint. Of course, the relatively strong demand for our products and services, despite the disruptions caused by the COVID-19 pandemic these two years have contributed to this performance,” he said.

“I am proud to say that Sime Darby is a true Malaysian multinational, with a footprint across the Asia Pacific region. Today, our operations outside Malaysia account for more than 85 per cent of our core profits,” he added.

“Our Motors division’s performance in the past year has been nothing short of exceptional. Demand for BMWs and our super-luxury marques have been extremely strong, especially in China. With the travel restrictions, many of our customers are unable to travel and are spending their excess cash on luxury items domestically,” Dato’ Jeffri said.

“The Industrial division had a slightly tougher year. Whilst demand from our mining customers in Australia remains resilient, we have seen a softening of the market and extremely intense competition in China. We do, however, have a strong order book moving into FY2022 and a bullish view on commodity prices. As governments worldwide rely on infrastructure spending to stimulate their economies, we expect demand for construction and mining equipment to intensify,” he added.

The Group continues to execute its growth plan, which contributed RM2.7 billion to FY2021 revenue. During the year, more BMW and Volvo showrooms were set up in China, while Ramsay Sime Darby Health Care acquired Manipal Hospitals, Klang, increasing its regional network of hospitals to seven.

Sime Darby had also remained committed in executing its plans to divest its non-core assets, which have generated approximately RM0.7 billion in proceeds to date. In FY2021, the Group benefited from a RM272 million gain from the sale of its stake in Tesco Malaysia. Additionally, Sime Darby also divested its interest in Eastern & Oriental Berhad and finalised a staggered exit for its three Jining River ports.

Sime Darby declared a second interim dividend of 8 sen per share and special dividend of 1 sen per share for Q4 FY2021. This brings the total dividend payout for FY2021 to 15 sen a share, representing a payout of RM1.02 billion or more than 70% of net profit.

“We expect that FY2022 will be a challenging year. The impact of the on-going COVID-19 pandemic and trade tensions is not really something we can estimate. However, our strong financial position and diversified operations should help us get through these challenges and place us in a good position for growth, once prospects and business sentiment improve,” Dato’ Jeffri said.